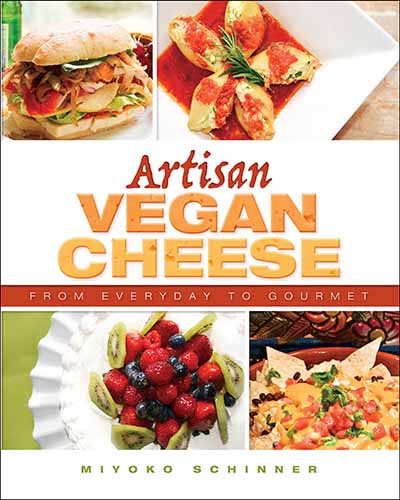 Artisan Vegan Cheese shares secrets for making homemade nondairy cheeses that retain all the complexity and sharpness of dairy counterparts.

Artisan Vegan Cheese shares secrets for making homemade nondairy cheeses that retain all the complexity and sharpness of dairy counterparts.

In Artisan Vegan Cheese, gourmet restaurateur and vegan food expert, Miyoko Schinner shares her secrets for making homemade nondairy cheeses that retain all the complexity and sharpness of their dairy counterparts while incorporating nutritious nuts and plant-based milk.

Miyoko shows how to tease artisan flavors out of unique combinations of ingredients, such as rejuvelac and nondairy yogurt, with minimal effort. The process of culturing and aging the ingredients produces delectable vegan cheeses with a range of consistencies from soft and creamy to firm.

For readers who want to whip up something quick, Miyoko provides recipes for almost-instant ricotta and sliceable cheeses, in addition to a variety of tangy dairy substitutes, such as vegan sour cream, creme fraiche, and yogurt. For suggestions on how to incorporate vegan artisan cheeses into favorite recipes, Miyoko offers up delectable appetizers, entrees, and desserts, from Caprese salad and classic mac and cheese to eggplant parmesan and her own San Francisco cheesecake.

Miyoko has been delivering up her style of gourmet vegan cuisine to the public for decades through her many enterprises, including a restaurant, natural food company, cooking classes, lectures, and books.

Her titles include the groundbreaking book, Artisan Vegan Cheese, and the most recent, The Homemade Vegan Pantry. Miyoko is the founder of Miyoko’s Creamery, makers of artisanal vegan cheese. She is co-host of Vegan Mashup, a cooking show on the Create Channel and seen on PBS.

“A must-buy vegan cookbook. Forget tofu feta: Artisan Vegan Cheese is going to blow the lid off off everything you’ve ever heard about vegan cheese (or tasted, for that matter).” – Anna Peraino, VegNews

“Miyoko has found the holy grail of thee culinary world… Artisan Vegan Cheese is exactly the guide we’ve been waiting for. This is one of the most beautiful and practical books you’ll ever own.” – Neal Barnard, MD, Physicians Committee for Responsible Medicine

“Miyoko fooled me when she made some non-dairy cheeses for a party. They looked like the gourmet cheeses often served at fancy parties and the flavor and texture were outstanding. I was delighted that she would be sharing the recipes.” – Ann Wheat, Millennium Restaurant