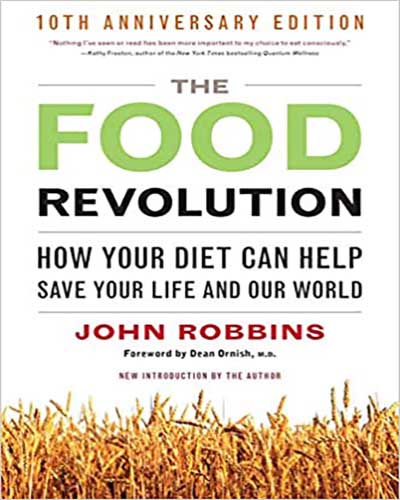 The Food Revolution discusses the health effects of eating GMO foods and animal products to expose the dangers in our factory farming system.

The Food Revolution discusses the health effects of eating GMO foods and animal products to expose the dangers in our factory farming system.

First published in 2001, The Food Revolution is still one of the most frequently cited and talked about books of the food-politics revolution. It was one of the very first books to discuss the negative health effects of eating genetically modified foods and animal products of all kinds, to expose the dangers inherent in our factory farming system, and to advocate a completely plant-based diet.

The book garnered endorsements by everyone from Paul Hawken to Neal Donald Walsch, Marianne Williamson to Julia Butterfly Hill. After ten years in print, The Food Revolution is timelier than ever- and a very compelling read.

John Robbins is the bestselling author of Voices of the Food Revolution, No Happy Cows, Diet for a New America, and many other works. He is the founder of EarthSave International and the co-founder and co-host of the 100,000+ member Food Revolution Network.

Robbins’ work has been the subject of cover stories and features articles in The San Francisco Chronicle, The Los Angeles Times, Chicago Life, The Washington Post, The New York Times, The Philadelphia Inquirer, and many of the nation’s other major newspapers and magazines. His life and work have also been featured in an hour-long PBS special titled Diet For A New America.

“Robbins, the author of the classic Diet for a New America, believes that plant-based nutrition and particularly vegan diets. . .lead to long life and good health. Citing statistics, research studies, and selected quotes that extol the benefits of such diets, he also argues that animal products are responsible for such diseases as obesity, heart disease, high blood pressure, and cancer. Robbins deplores the inadequate sanitation and inspection in meat-processing plants and argues that many of the illnesses and stomach ailments that people complain about the result of animal agriculture and the pathogens it introduces into our bodies. . .” – Irwin Weintraub, Brooklyn College Library, New York