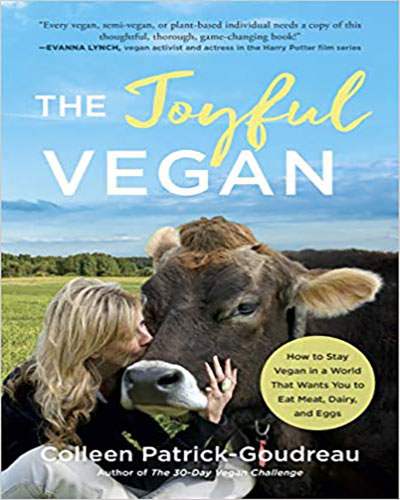 The Joyful Vegan helps you deal with the social, cultural, and emotional aspects of being vegan in a non-vegan world.

The Joyful Vegan helps you deal with the social, cultural, and emotional aspects of being vegan in a non-vegan world.

Dealing with being vegan in a non-vegan world? That’s the hard part.

Colleen’s new book, The Joyful Vegan, is here to help.

Many people go vegan for animals, the environment, or their health. Despite the benefits, they’re often met with resistance from friends, family, and society.

These outside factors can make veganism seem tricky to sustain. Emotionally exhausting even.

This scenario leads to a sad reality. Many vegans return to eating meat, dairy, or eggs.

It’s not because there’s nothing to eat.

It’s not because there isn’t enough protein in plants.

And it’s not because people lack willpower.

Instead, people stay vegan or not depending on how well they handle the social, cultural, and emotional aspects of living vegan.

The Joyful Vegan offers tips for:

Using the tools provided in this book, readers will find they can live ethically, eat healthfully, engage socially joyfully.

Colleen is the author of six books, including The Joy of Vegan Baking and Color Me Vegan.

She is a public speaker and a multimedia host. Her inspiring podcast, Food for Thought, was voted Favorite Podcast by VegNews magazine readers.

Colleen is a regular contributor to National Public Radio and has appeared on The Food Network and PBS.

“The Joyful Vegan is a breath of fresh air in a world that, far too often, thumbs its nose at people who prioritize compassion. Every vegan, semi-vegan, or plant-based individual needs a copy of this thoughtful, thorough, game-changing book!” — Evanna Lynch, vegan activist, and actress in the Harry Potter film series

“The Joyful Vegan resonates deeply with me. Colleen Patrick-Goudreau identifies exactly what we need more of in our interactions with one another: greater empathy, understanding, and respect for our common humanity.” — Cory Booker, US senator.

“Colleen Patrick-Goudreau has a unique ability to communicate with conviction and moral clarity while also acknowledging the gray areas of ethical living. With The Joyful Vegan, she gives voice to the universal challenges vegans face while empowering us with exactly what we need to overcome them. This book is a game-changer for new and veteran vegans alike.” — Gene Baur, president, and co-founder of Farm Sanctuary and author of Farm Sanctuary

“The unique contribution of The Joyful Vegan is Colleen Patrick-Goudreau’s 10 Stages that many vegans experience when they stop eating animals. The insights she provides around this concept are deeply empowering and validating for vegans who struggle living in a dominant, animal-eating culture.” — Melanie Joy, PhD, author of Beyond Beliefs and Why We Love Dogs, Eat Pigs, and Wear Cows