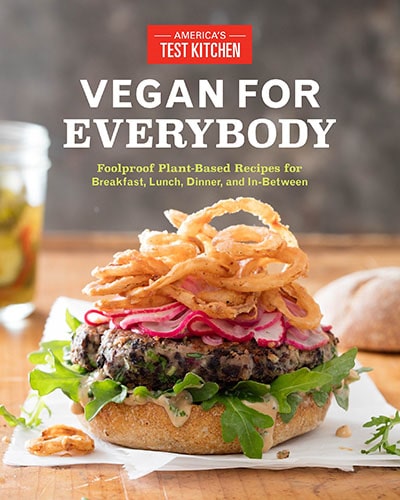 Vegan for Everybody: Foolproof Plant-Based Recipes for Breakfast, Lunch, Dinner, and In-Between

In Vegan for Everybody, America’s Test Kitchen decodes and demystifies vegan cooking, so you can reap its many benefits and avoid the pitfalls of bland food, lack of variety, and over-processed ingredients. You’ll find approachable, fresh, vibrant recipes for breakfast, lunch, dinner, and in between.

Veganism is going mainstream. The benefits of consuming fewer animal products appear frequently in the news, and public figures and celebrities have openly embraced the tenets of a vegan diet, bringing it further into the food consciences of baby boomers, millennials, and postmillennials alike.

People are looking to get hearty, plant-based meals onto their table. But eating vegan can seem overwhelming: Will it be flavorful? Satisfying? Easy to make? And it’s easy to rely on processed foods. America’s Test Kitchen addresses head-on what intimidates people: finding great-tasting and filling vegan protein options, cooking without dairy, preparing different whole grains and vegetables, and even baking.

America’s Test Kitchen is a real 2,500 square foot test kitchen located just outside of Boston that is the home to more than three dozen full-time cooks and product testers. America’s Test Kitchen publishes two magazines, Cook’s Illustrated and Cook’s Country, with a combined 1.3 million+ subscribers, and dozens of top-selling cookbooks.

“Thanks to the clever folks at America’s Test Kitchen, their detail-oriented ‘Vegan for Everybody‘ cookbook delves into the realm of vegan home baking and proves that it’s not impossible. Once you grasp a few basic concepts, you’ll be whipping up baked goods that rival, or even surpass, their traditional counterparts.” – Katherine Martinko, TreeHugger.com

“I’ve made 4 recipes since I received this cookbook a week ago. The results are really extraordinary. The blueberry muffin recipe produced the most delicious muffins I’ve tasted, vegan or not. I made the fettuccine alfredo last night and the sauce was creamy, smooth and velvety. The “parmesan cheese” recipe yields the best I have tasted. I can’t wait to try every recipe. The photographs are beautiful and the recipes are well written. This may become the Gold Standard of vegan cookbooks. Highly recommended!” – David Geddes, Amazon

“This is the vegan cookbook I’ve been waiting for. I don’t eat vegan to eat gluten-free/fat-free/super-healthy 24/7, and this is full of delicious recipes that are indulgent when they should be (the chocolate chip cookies and brownies are incredible) and well tested, as the name/brand implies. In addition to the desserts I already mentioned, I’ve tried the blueberry muffins, chickpea noodle soup, and brown rice burrito bowl so far – all get 5 stars. Seriously excited to try everything else in this. As for the quality of the cookbook itself – pictures for every recipe, detailed instructions, explanations for why they chose what they did ingredient-wise – basically it’s as good as the recipes themselves.” – Kristie, Amazon