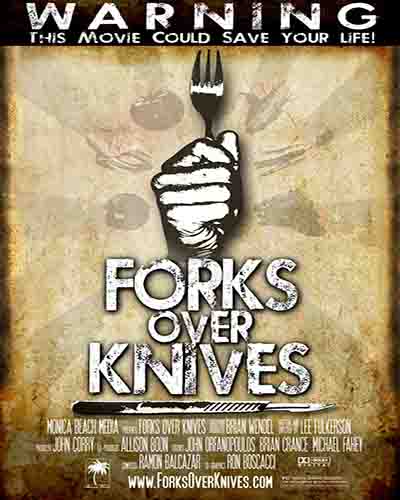 Forks Over Knives examines the claim that most degenerative diseases can be controlled or reversed by rejecting animal-based processed foods.

Forks Over Knives examines the claim that most degenerative diseases can be controlled or reversed by rejecting animal-based processed foods.

Forks Over Knives takes a look at the way we eat. Most of the degenerative diseases that affect us can be controlled or reversed by eliminating animal-based and processed foods from our diets. The film follows the journeys of a pair of researchers, Dr. T. Colin Campbell and Dr. Caldwell Esselstyn.

Dr. Campbell was a nutritional scientist at Cornell University. He wanted to produce a “high quality” animal protein to bring to the poor and malnourished areas of the third world. While in the Philippines, he made a discovery. The country’s wealthier children, who were consuming high amounts of animal-based foods, were much more likely to get liver cancer. Dr. Esselstyn was a surgeon and head of the Breast Cancer Task Force at the Cleveland Clinic. He found that many of the diseases he routinely treated were virtually unknown in parts of the world where animal-based foods were rarely consumed.

These discoveries inspired both doctors. This led to each of them conducting several groundbreaking studies. One of them took place in China and is still among the most comprehensive health-related investigations ever undertaken. Their research led them to shocking conclusions. Degenerative diseases like heart disease, type 2 diabetes, and even some forms of cancer, could almost always be prevented or reversed by adopting a plant-based diet.

The idea of food as medicine is put to the test. Throughout the film, cameras follow “reality patients” who have chronic conditions from heart disease to diabetes. Doctors teach these patients how to adopt a plant-based diet. This was the primary approach to treat their ailments. The challenges and triumphs of their journeys are shared.

Forks Over Knives was produced by Virgil Films & Entertainment and directed by Lee Fulkerson. Find out more about the film at forksoverknives.com.

“Forks Over Knives is not subtle. It plays as if it had been made for doctors to see in medical school. Few doctors seem prepared to suggest proper nutrition as an alternative to pills, stents, and bypasses. Although regular exercise, especially walking, is invaluable, the film shows only a little exercise and focuses singlemindedly on nutrition. The bottom line: I am convinced this message is true. A plant-based whole foods diet is healthy. Animal protein is not necessary or should be used sparingly as Asians did, as a flavoring and not the main course. This adds the advantage of allowing us to avoid the chemicals and carcinogens pumped into livestock and poultry. Fast food is lethal. Parents who feed it to their children are helping them get hooked on fat, salt, and sugar addiction. The facts are in.” – Roger Ebert. Forks Over Knives Movie Review. 11 May 2011