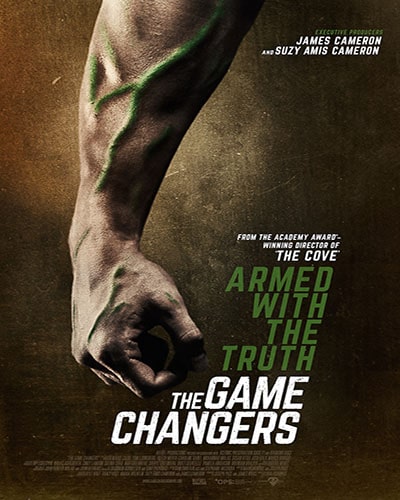 The Game Changers tells the story of James Wilks — elite special forces trainer and winner of The Ultimate Fighter — as he travels the world on a quest for the truth behind the world’s most dangerous myth: that meat is necessary for protein, strength and optimal health.

The Game Changers was produced by James Wilkes and Joesph Pace and directed by Louie Psihoyos. Find out more about the film at gamechangersmovie.com.

“…Wilks launches into a larger study of fellow sportspeople and physical high-fliers who have switched to veganism and reaped the benefits: Schwarzenegger, record-holding strongman Patrik Baboumian, cyclist and Olympic medalist Dotsie Bausch and rugged Australian conservationist Damien Mander are among those showing up to make what was once dismissed as a wispy hippie fad look very robust indeed.” – Guy Lodge, Variety. Film Review: The Game Changers. 8 March 2018

“Not the first and surely not the last film hoping to overwhelm carnivores with evidence that abandoning meats wouldn’t be the kind of change they’ve been led to believe, Louie Psihoyos’ The Game Changers puts most of its energy into profiling athletes whose amazing strength and endurance derives entirely from plant-based diets.” – John DeForce, The Hollywood Reporter. Film Review – Sundance 2018. 31 January 2018