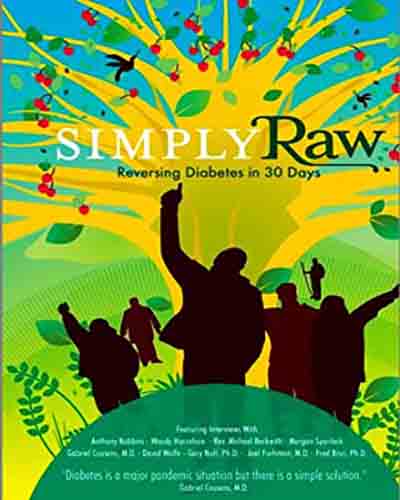 Simply Raw: Reversing Diabetes in 30 Days is an independent documentary film that chronicles six Americans with diabetes who switch to a diet consisting entirely of vegan, organic, uncooked food in order to reverse disease without pharmaceutical medication.

The six are challenged to give up meat, dairy, sugar, alcohol, nicotine, caffeine, soda, junk food, fast food, processed food, packaged food, and even cooked food for 30 days. The film follows each participant’s remarkable journey and captures the medical, physical, and emotional transformations brought on by this radical diet and lifestyle change. We witness moments of struggle, support, and hope as what is revealed, with startling clarity, is that diet can reverse disease and change lives.

The film highlights each of the six before they begin the program and we first meet them in their home environment with their families. Each participant speaks candidly about their struggle to manage their diabetes and how it has affected every aspect of their life, from work to home to their relationships.

Simply Raw was produced by Raw for Thirty, LLC and directed by Aaron Butler.

“A whole-food, plant-based lifestyle is extremely powerful when it comes to healing and prevention, but when we focus on applying those dietary choices in the raw form they become even more transformational for our health. People’s body and health are transformed on this lifestyle literally from head to toe. Whether it be diabetes, blood pressure, cholesterol, digestion, vitality or you name it – a raw food approach is truly remarkable when it comes to its healing qualities. And the best part is that this method does not include or involve any expensive supplements, and can be the cheapest way to eat and the most environmentally friendly, not to mention the numerous short-term and long-term health benefits it offers. All we need to do is decide what are our priorities and make our choices. . .If you want to learn more about healing diabetes and other chronic diseases like cancer and heart disease, to empower yourself or someone you know, I highly recommend this film. And if nothing else, watch it to learn for yourself about the wonderful world of raw foods and the numerous benefits it can offer you. ” – Evita Ochel. Evolving Wellness. Film Review: Simply Raw. 23 June 2009

“Not the first and surely not the last film hoping to overwhelm carnivores with evidence that abandoning meats wouldn’t be the kind of change they’ve been led to believe, Louie Psihoyos’ The Game Changers puts most of its energy into profiling athletes whose amazing strength and endurance derives entirely from plant-based diets.” – John DeForce, The Hollywood Reporter. Film Review – Sundance 2018. 31 January 2018