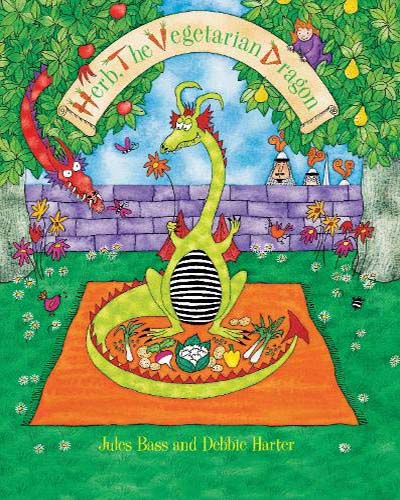 All the dragons in the forest of Nogard like nothing better than raiding Castle Dark and carrying off princesses to eat all the dragons, that is, except one.

Herb is at his happiest tending his vegetable patch, for Herb is a vegetarian.

So it is unfortunate that he is the one captured by the castle’s knights in armor. Treacherous Meathook and his dragon cronies will only help Herb if he agrees to eat meat will he give in to their blackmail?

Jules Bass has produced several animated films, including The Hobbit, The Last Unicorn, Rudolph the Red-Nosed Reindeer, Frosty the Snowman, as well as several hit animated television shows such as ThunderCats.

The London Times called Herb one of the best books of the season. It was short-listed for the Kate Greenaway Award and praised by Paul McCartney as: “A magical read for all new thinkers, young and old…” Herb made his television debut on The Food Network.

“A magical read for all new readers, young and old; Herb’s story tells the tale of the future.”  – Sir Paul McCartney

“Lush with growing plants and green grass, the artwork is filled with details that readers will pore over.” – School Library Journal

“The book’s case for vegetarianism and understanding of differences is further enhanced when accompanied by the author’s Cooking With Herb: A Cookbook for Kids…. Amusing illustrations characterize both works; the recipes and safety tips in the cookbook will help kids enjoy cooking while learning good kitchen habits.” – NAPRA Review