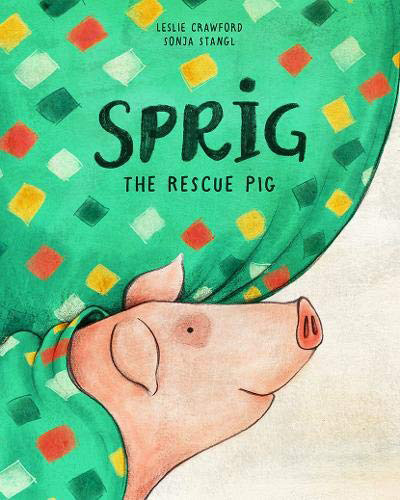 Sprig the Rescue Pig was inspired is a light-hearted tale that introduces a smart and inquisitive pig who finds his way to a sanctuary.

Sprig the Rescue Pig was inspired is a light-hearted tale that introduces a smart and inquisitive pig who finds his way to a sanctuary.

Things aren’t looking good for Sprig, who is packed into a fast-moving truck with dozens of other pigs. He doesn’t know where they’re going, but his nose knows there’s something better out there.

So with one dramatic leap or more of a tumble, Sprig sets out on a pig-centered adventure that leads him to his new best friend, a girl named Rory. Inspired by real events, this light-hearted tale introduces kids to an intelligent and curious pig who finds his way to an animal sanctuary.

The book includes a bonus section called “More About Pigs,” where curious readers will learn that pigs are smart enough to play video games, enjoy sleeping in cozy pig piles, run fast, and other surprising facts.

Sprig the Rescue Pig is perfect for ages 4 to 7.

Leslie Crawford always thought she’d wind up living in the country raising vegetables and animals on a farm straight out of Charlotte’s Web. That didn’t happen, though she does have six chickens and five rescue pigeons in her San Francisco home. Crawford became a writer instead, producing stories for San Francisco Magazine, Salon, Metropolitan, and many other publications and websites before channeling her farming aspirations into a story about a hen who finds her way out of a cramped cage into a life of adventure with a young boy.

“In telling these heartwarming tales of resilience, compassion, and love, Crawford avoids the more brutal realities of factory farming, showing simply that these farms are extremely unhappy places for such intelligent and emotional beings. She focuses instead on how truly wonderful these overlooked and poorly treated animals are―that they’re way more than just bacon and nuggets.” – Reynard Loki, Ecowatch

“With Sprig, Leslie Crawford shows us how it’s possible to expand our relationship with, and our connection to, the natural and non-human world. She uses language that is nonjudgmental, beautiful, and expressive. The illustrations, produced by Sonja Stangl, are delightful. If you are a parent of younger children I recommend you pick this up and start to share these stories with your children.” – Scott Mann, creator of The Permaculture Podcast

“Sprig is utterly charming, beautifully written, and the illustrations are enchanting. This is a great book for any child. You don’t pull punches but you don’t do anything gruesome or graphic or scary. Sprig the Rescue Pig is delightful.” – Victoria Moran, creator and author of Mainstreet Vegan