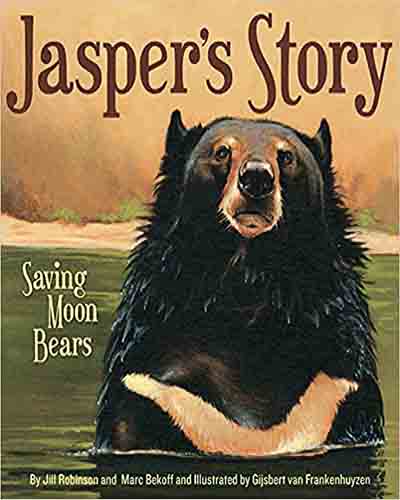 Jasper’s Story: Saving Moon Bears is the story about Jasper.

For years Jasper, a moon bear, lived a miserable existence, held captive in a cage by bear farmers in rural China. The farmers extracted the bile from Jasper’s body and sold it to be used in traditional medicines. It’s a horrific practice and is conducted on thousands of moon bears each year. But now Jasper has the chance to be free and live a life away from pain and torture.

In 2000, Animals Asia, an animal welfare organization, rescued Jasper and other captive moon bears, taking them to its Moon Bear Rescue Centre. Here veterinarians attended to the bears’ wounds, hoping to give them some chance of peaceful existence in the animal sanctuary. But after so many years of abuse Jasper’s wounds, both physical and mental, are extensive.

Can Jasper mend his body and mind and finally enjoy the life he was meant to live?

After visiting a Chinese bear farm in 1993, Jill Robinson exposed the plight of endangered bears cruelly exploited for their bile. In 1998 she founded Animals Asia, which has established sanctuaries in China and Vietnam and made freedom possible for hundreds of bears.

For her animal welfare work, Jill has received the Readers Digest Hero for Today Award, a Genesis Award from the Humane Society of the United States, and the Jean Marchig Animal Welfare Award. She is Hong Kong’s Outstanding Earth Champion, an Asia World Animal Day Ambassador, a World Federation of Chinese Medicine Societies Herbal Committee council member, and a member of the Society of Woman Geographers. In 1998 Jill was named to the Most Excellent Order of the British Empire by Queen Elizabeth II.

Marc Bekoff, Ph.D., is an animal behavior expert specializing in animal minds and compassionate conservation. He has written numerous books including The Emotional Lives of Animals, Why Dogs Hump and Bees Get Depressed, and Rewilding Our Hearts.

“Get ready to wipe away a few tears after reading this. Robinson has dedicated her life to rescuing the bears of China that have been abused by those extracting bear bile for use in traditional Asian medicines. Jasper is one of them, a moon bear, held in a tiny cage for 15 years before arriving at Robinson’s center in China, called Animals Asia. At first, he is wary, even violent, but as Robinson and her team methodically integrate him into the community, Jasper becomes the poster bear for all that can be accomplished. Eventually, he’s an ambassador to newcomer bears, touching and patting them to make them feel more comfortable. The text is a bit overwritten in the beginning, but as the book follows Jasper’s progress, it settles down to a moving narrative. The sturdy acrylic illustrations are derived from van Frankenhuyzen’s photographs taken at the sanctuary, and their tracking of Jasper’s journey to wellness captures both the effort and emotion. A final two-page spread afterword tells more about Robinson and her work. Grades 2-5.” – Ilene Cooper. Booklist.