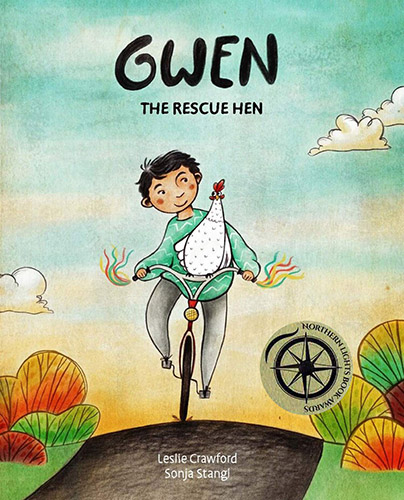 Using her wits, Gwen dodges danger until she finds friendship with a boy named Mateo. Together they learn how extraordinary chickens are.

Using her wits, Gwen dodges danger until she finds friendship with a boy named Mateo. Together they learn how extraordinary chickens are.

Gwen has spent her whole life in a big egg-laying hen house, so she knows very little about what chickens can do (besides lay eggs, of course). A fateful tornado turns her world upside-down and sideways, landing her in a strange new place that’s nothing like the hen house.

Using her wits and chicken superpowers, Gwen dodges danger at every turn until she finds safety and friendship with a boy named Mateo. Together they discover how extraordinary an ordinary chicken is.

The book includes a bonus section called “More About Chickens,” where curious readers can learn that chickens have extraordinary eyesight, a complex language of 24 sounds, and are descended from dinosaurs, among other fun facts.

Leslie Crawford always thought she’d wind up living in the country raising vegetables and animals on a farm straight out of Charlotte’s Web. That didn’t happen, though she does have six chickens and five rescue pigeons in her San Francisco home. Crawford became a writer instead, producing stories for San Francisco Magazine, Salon, Metropolitan, and many other publications and websites before channeling her farming aspirations into a story about a hen who finds her way out of a cramped cage into a life of adventure with a young boy.

“In telling these heartwarming tales of resilience, compassion, and love, Crawford avoids the more brutal realities of factory farming, showing simply that these farms are extremely unhappy places for such intelligent and emotional beings. She focuses instead on how truly wonderful these overlooked and poorly treated animals are―that they’re way more than just bacon and nuggets.” – Reynard Loki, Ecowatch

“Our society has long needed more kid-appropriate, high-quality media that gives them access to pro-animal stories in a compelling, age-appropriate way. Gwen the Rescue Hen does just that, allowing young readers to follow along as this darling chicken goes on the adventure of a lifetime thanks to a sudden twist of fate. Her story safely allows young readers to ask important questions about humans’ relationships to animals, and the stunning illustrations allow readers to stay fully engaged. I have no doubt this book will quickly become your kid’s favorite nighttime read.” – Jasmin Singer, co-host of the “Our Hen House” podcast, Senior Editor of VegNews Magazine