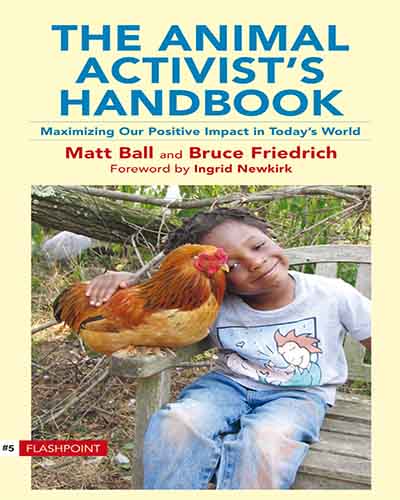 The Animal Activist's Handbook shows you various ways to live a meaningful life through effective and efﬁcient advocacy.

The Animal Activist's Handbook shows you various ways to live a meaningful life through effective and efﬁcient advocacy.

Matt Ball and Bruce Friedrich take the plight of the world’s animals seriously and have dedicated their lives to end their suffering.

The Animal Activist’s Handbook argues that meaning in life is to be found, quite simply, in turning away from the futile pursuit of “more,” and focusing instead on leaving the planet a better place than you found it. The critical component of creating a better world for all is thoughtful, deliberate, and dedicated activism that takes suffering seriously.

The authors build a ground-up case for reasoned, impassioned, and joyous activism that makes the most difference possible, and suggest a variety of ways to live a meaningful life through effective and efﬁcient advocacy.

Matt Ball, along with Jack Norris, co-founded Vegan Outreach in 1993. Before working full-time as the Executive Director of Vegan Outreach, he was a Department of Energy Global Change Fellow, and earned degrees in the Department of Forest Ecology at the University of Illinois, and the Department of Engineering and Public Policy at Carnegie Mellon University. Vegan Outreach activists have distributed millions of detailed animal advocacy booklets around the world, with distribution growing every year. Along with Mr. Norris, Matt was elected into the Animal Rights Hall of Fame in 2005.

Bruce Friedrich is vice president of policy and government affairs for People for the Ethical Treatment of Animals (PETA), the world s largest animal rights organization, with more than 2 million members and supporters. Before joining PETA more than 12 years ago, Bruce spent six years working with the poor of Washington, D.C. in a Catholic Worker hospitality house there, as well as leading demonstrations against globalization, imperialism, violence, and war. He has been a progressive activist for more than 20 years.

“This book is so much more than a how-to guide for activists. It is an inspirational and motivational opus from the two gentlest yet most effective giants in the movement. The Animal Activist’s Handbook will elevate your activism and forever alter who you are and who you want to be.” – Rory Freedman, co-author of Skinny Bitch

“The Animal Activist’s Handbook is full of good sense, thoughtful advice, and practical action on helping all of us to reduce the needless suffering of our fellow creatures. I recommend it.” – Matthew Scully, author of Dominion

“The Animal Activist’s Handbook punches way above its weight. Rarely have so few pages contained so much intelligence and good advice. Get it, read it, and act on it. Now.” – Peter Singer, author of Animal Liberation and Ethics into Action