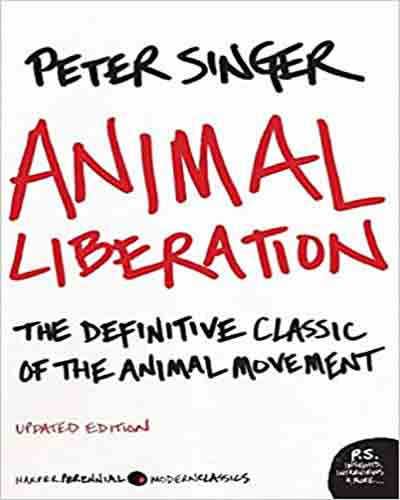 An important and persuasive appeal to conscience and justice, Animal Liberation is essential reading for the supporter and skeptic alike.

An important and persuasive appeal to conscience and justice, Animal Liberation is essential reading for the supporter and skeptic alike.

In his introduction, Peter Singer writes: “This book is about the tyranny of human over non-human animals. This tyranny has caused and today is still causing an amount of pain and suffering that can only be compared with that which resulted from centuries of tyranny by white humans over black humans.”

Since its original publication in 1975, this groundbreaking work has awakened millions of concerned men and women to the shocking abuse of animals everywhere — inspiring a worldwide movement to eliminate much of the cruel and unnecessary laboratory animal experimentation of years past.

An important and persuasive appeal to conscience, fairness, decency, and justice, Animal Liberation is essential reading for the supporter and the skeptic alike.

Peter Singer’s other books include Writings on an Ethical Life, Practical Ethics, and The Life You Can Save, among many others. He is the Ira W. DeCamp Professor of Bioethics at Princeton University’s Center for Human Values.

“Forty years ago, Peter Singer sparked a revolution with his seminal publication, Animal Liberation. Nearly half a century later, the world’s eyes have been opened and the fight for animal rights has never been stronger.” — Nathan Runkle, founder and executive director of Mercy for Animals

“Few books can honestly be said to have launched a major social movement. Animal Liberation is one. Peter Singer’s work has changed millions and millions of lives, including mine. Much more importantly, though, Professor Singer’s book helped define and build the movement that is fundamentally shifting the way humans relate to our fellow animals and that will eventually end the barbaric treatment of billions of sentient individuals.” —Matt Ball, author of The Accidental Activist and senior adviser for VegFund

“A most important book that will change the way many of us look at animals and, ultimately, at ourselves.” — Chicago Tribune

“Singer’s documentation is unrhetorical and unemotional, his arguments tight and formidable, for he bases his case on neither personal nor religious nor highly abstract philosophical principles, but on moral positions most of us already accept.” — The New York Times Book Review

“Everyone ought to read Animal Liberation, and ponder deeply whether we do not need to change our view of the world and our responsibility toward its creatures.” —Richard Adams, author of Watership Down

“Peter Singer may be the most controversial philosopher alive; he is certainly among the most influential.” — The New Yorker