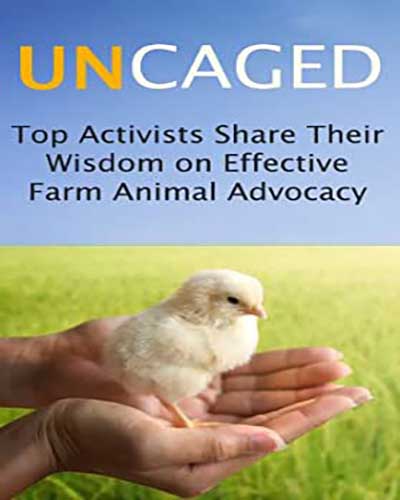 Uncaged provides an abundance of wisdom and inspiration that will help you have a big impact for farm animals.

Uncaged provides an abundance of wisdom and inspiration that will help you have a big impact for farm animals.

In Uncaged, thirty leading activists, including Paul Shapiro, Peter Singer, and Colleen Patrick-Goudreau, offer their hard-won insights on effective farm animal advocacy. Whether you’re an aspiring or seasoned activist, Uncaged provides an abundance of wisdom and inspiration that will help you have a big impact for farm animals.

In an interview with New Harvest, Davidow had this to say when asked if there are one or two pieces of advice to summarize the most effective farm animal advocacy strategy he learned when writing Uncaged:

“I would say two things. (1) Don’t preach to people, outreach is more about listening than talking. Find out where people are coming from, you have to empathize with people to influence them, understand their values and the barriers coming between their current lifestyle and more compassionate choices. (2) Don’t be absolutist. Really look at which consumption choices cause the most suffering. If you crunch the numbers it turns out giving up chicken has much more effect than other animal foods. This is mainly because chickens are smaller,  200 chickens produce the amount of meat that 1 cow does. Convince someone to give up chicken, and it has almost as much impact as convincing someone to go vegetarian and way more than persuading someone to give up red meat.”

Ben Davidow is a web developer living in San Francisco. He’s been concerned about animal rights since becoming a vegetarian when he was 8 years-old after being inspired by later reading Animal Liberation by Peter Singer.

Sorry, there are no reviews for Uncaged right now.

Do you have a published review that should appear here? Contact me.