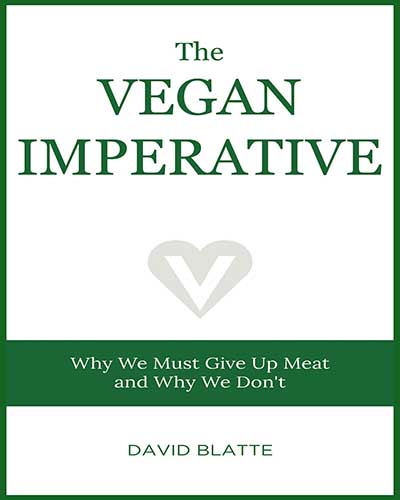 The Vegan Imperative, through a compelling narrative, explains why veganism is a moral, environmental, and heath imperative for everyone.

The Vegan Imperative, through a compelling narrative, explains why veganism is a moral, environmental, and heath imperative for everyone.

In recent years, veganism has exploded into popular culture and mainstream consciousness. Yet despite its ubiquity, few embrace it themselves—it is something “other people” do. The Vegan Imperative, through a compelling narrative, explains why veganism is for everyone. It is more than just a passing fad. It is a moral, environmental, and health imperative.

After making the case for veganism, The Vegan Imperative goes a step further, tackling the enigmatic question of why, given these imperatives, people continue to eat meat. The book provides the reader with a comprehensive look at veganism, addressing both sides of the vegan coin: “Why vegan?” and “Why not vegan?”

In part one, the author, a former animal law attorney and executive director of Vegan Action focus on the three main reasons people go vegan—morality, environment, and health. After exploring the phenomenon of speciesism, he provides a rare glimpse into the world of animal law, taking the reader through six actual cases.

With groundbreaking analysis, part two explores the broad array of factors underlying the decision to eat meat. Examining such topics as cognitive dissonance, dissociation, avoidance, cultural norms, social factors, physiology, and more, vegans will have a greater understanding of why others eat meat, and nonvegans will gain insight into the seen and unseen influences that determine their dietary choices.

Based on the author’s personal journey, interviews with vegans, vegetarians, and meat-eaters, and the most recent scientific studies, The Vegan Imperative entertains the reader while offering substantial food for thought.

David Blatte is a former executive director of Vegan Action, where he instituted the “certified vegan” logo, now used on over 10,000 products. He was also an animal law attorney, handling a number of groundbreaking cases featured in the book. He is a co-founder of Dharma Voices for Animals, a nonprofit dedicated to promoting veganism within the meditation and dharma communities, and director of the film Animals and the Buddha.

David was also a public defender, representing criminal defendants who could not afford an attorney. A certified teacher, he taught high school math at Berkeley High School and social studies as the City of Ten Thousand Buddhas boys school. He has also been a professional blackjack player, realtor, and computer programmer.

His primary pursuit is meditation. In over 20 years of meditating, he has lived on monasteries in Asia and the United States for just under a year and has accumulated over two years of silent, intensive practice. He also teaches meditation.

“David Blatte interweaves the central tenets of the vegan ethic with his personal narrative in a way that is accessible and engaging to the reader. He adds the unique influence of Buddhist teachings to support his journey of understanding how humans contemplate and process the concept of true compassion for all. The author addresses the many internal and external influences we each experience in either making or not making the connection of the consequences of eating animals – the meat-paradox and compassion.  Through incorporating different perspectives from a diverse group of individuals, the reader is presented with strong support for the vegan moral imperative. David takes the time to address all of the consequential issues associated with being a meat eater and clearly and factually debunks every argument for speciesism. The author poignantly asks “Why not vegan?” and supports any and all efforts towards this end. Most importantly, he encourages all of us to do the best we can – he reminds us, even though none of us are perfect, we can aspire to be.” – Krissi Vandenberg, Executive Director, Vegan Action

“A fascinating and informative glimpse into the life of an animal activist, thinker, and lawyer, David Blatte’s The Vegan Imperative illuminates the ability of law, philosophy, and psychology to support the movement for animal rights. As a matter of justice, animals deserve a legal and social status that reflects the richness of their lives and their capacity for joy and suffering. The Vegan Imperative makes a compelling case for such a transformation.” – Matthew Liebman, Chair of the Justice for Animals Program and Associate Professor, University of San Francisco School of Law

“If we are to forge a pathway to our collective well-being, we need to recognize the interconnectedness between diet, animal cruelty, and the health of our precious larger body, this earth. The Vegan Imperative shines a clear light on this crucial domain, showing how we can respond nonjudgmentally, wisely, and with compassion to the suffering in our world.” – Tara Brach, author of Radical Acceptance and Radical Compassion

“David begins The Vegan Imperative with a moving depiction of how personal tragedy and his own suffering led to an awareness of the universality of suffering, and how this awakened a sense of all-embracing compassion in his heart. He combines his concern for animals with humor, storytelling, and the latest research, engaging the reader as he recounts his journey to veganism and articulates, with compelling clarity, the moral, environmental, and health reasons to refrain from eating animal-sourced foods. Having answered why vegan, David provides helpful insights into the enigmatic question: despite the harm, why do kind and caring people not go vegan? For those unfamiliar with veganism, this book provides many revelations, and even seasoned vegans will discover fresh ideas and new perspectives. For anyone striving for a life of greater peace and harmony–vegans and nonvegans alike. The Vegan Imperative is a must-read.” – Dr. Will Tuttle, author of The World Peace Diet