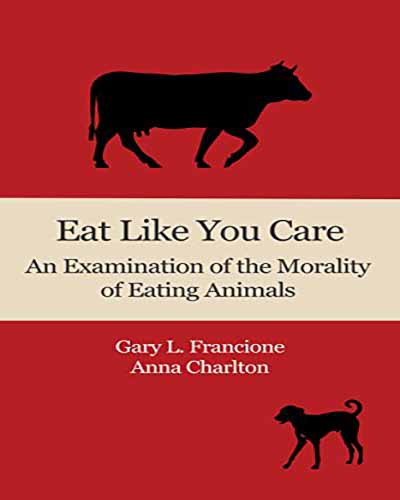 We all claim to agree that it’s wrong to inflict “unnecessary” suffering and death on animals. . .However “humanely” we treat and kill these animals, the amount of animal suffering we cause is staggering.

Yet, no one maintains that animal foods are necessary for optimal health. Indeed, mounting empirical evidence points to animal foods being detrimental to human health. But however you evaluate that evidence, there can be no serious doubt that we can have excellent health with a vegan diet.

Eat Like You Care shows there is no difference, or at least not any difference that matters morally. Prof. Gary L. Francione and Prof. Anna Charlton argue that if you think animals matter morally – if you reject the idea that animals are just things – your own beliefs require that you stop eating animal products. There is nothing “extreme” about a vegan diet; what is extreme is the inconsistency between what we say we believe and how we act where animals are concerned.

Gary L. Francione is Board of Governors Distinguished Professor of Law and the Nicholas deB. Katzenbach Scholar of Law and Philosophy at Rutgers University School of Law.

Anna Charlton is Adjunct Professor of Law at Rutgers University School of Law. She was the co-founder and co-director (with Gary L. Francione) of the Rutgers Animal Rights Law Clinic from 1990-2000.

“Persuading humans to adjust their thinking, and subsequent behaviour, often seems an insurmountable challenge.  However, with “Eat Like You Care”, Francione and Charlton provide intelligent and incontrovertible arguments against our current attitudes towards our fellow beings with which vegans and would-be vegans may arm themselves.” – Alex Wilmot. Animal Alliance of Canada. Book Review: Eat Like You Care. 15 February 2018