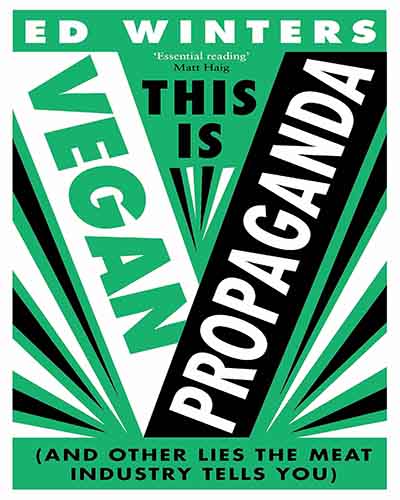 This is Vegan Propaganda

This Is Vegan Propaganda explores ways that animal farming affects the plus the cultural and psychological factors that drive our behaviors.

This is Vegan Propaganda

This Is Vegan Propaganda explores ways that animal farming affects the plus the cultural and psychological factors that drive our behaviors.

Every time we eat, we have the power to radically transform the world we live in.

Our choices can help alleviate the most pressing issues we face today: the climate crisis, infectious and chronic diseases, human exploitation, and, of course, non-human exploitation. Undeniably, these issues can be uncomfortable to learn about but the benefits of doing so cannot be overstated. It is quite literally a matter of life and death.

Through exploring the major ways that our current system of animal farming affects the world around us, as well as the cultural and psychological factors that drive our behaviors, This Is Vegan Propaganda answers the pressing question, is there a better way? Whether you are a vegan already or curious to learn more, this book will show you the other side of the story that has been hidden for far too long.

Based on years of research and conversations with slaughterhouse workers and farmers, animal rights philosophers, environmentalists, and everyday consumers, vegan educator and public speaker Ed Winters will give you the knowledge to understand the true scale and enormity of the issues at stake.

Ed Winters is a compassionate activist and vegan educator from the UK. He is a public speaker who has been invited to schools, universities, and businesses across the world. Ed has given speeches at over a third of UK universities and at Ivy League colleges, including as a guest lecturer at Harvard University in 2019 and 2020. He has also spoken at major companies including Google on numerous occasions, Facebook, and The Economist.

“Everything you wanted to know about veganism but was afraid to ask. Ed offers a clear insight into the ethical debate around veganism for vegans and non-vegans alike. He explores why the word ‘vegan’ inspires strong emotions and challenges all of us, whatever our dietary choices, to be aware of the decisions we are making. Ed’s approach is to bring logic, philosophy, and understanding to a debate that too often descends into chaos. Essential reading.” ―Matt Haig, best-selling author of The Midnight Library

“Ed has used his vast knowledge regarding meat & dairy production to create a must-read book for everyone, vegan and non-vegan alike. His arguments are compelling and grounded in facts and logic. This is Vegan Propaganda (And Other Lies the Meat Industry Tells You) presents an indisputable case for veganism and shows us that there is a far better way of feeding the planet. An eye-opening book of our time.” ―Moby

“In this book, Ed provides an overview of the ethical problems in animal agriculture. He also explores the psychological and social mechanisms behind why we do what we do, showing us exactly how we violate our own values and beliefs every single time we eat animals and animal products. As an academic, I was deeply impressed with his logic, sound reasoning, and knowledge. With ease and accessibility, Ed has taken complex ideas and weaved them into a clear and understandable book that struck deep and powerfully. This kind of book has been needed for a very long time; it bridges the gap between theorists and the public audience, leaving us stunned by the truth and hopeful for the future.” —Dr. Sparsha Saha (Department of Government, Harvard Universit