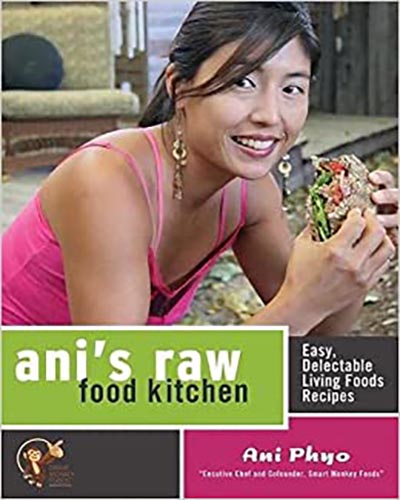 Ani’s Raw Food Kitchen is the ultimate gourmet, living foods “uncookbook” for busy people. You don’t have to sacrifice taste or style to reap the benefits of raw foods. These delectable, easy recipes emphasize fresh, animal-free ingredients and how to include more organics into your daily diet. Chef Ani offers delicious raw, animal-free versions of foods like breakfast scrambles, pancakes, chowders, bisques, and other soups, cheezes, mylks, lasagna, burgers, cobblers, pies, and cakes, and more.

Included are recipes for dishes such as:

Ani Phyo is the author of several cookbooks and was awarded “Best Vegetarian Cookbook USA 2007.” Ani has received four Best of Raw 2008 Awards for Best Chef, Favorite Cookbook, Favorite Educator, and won Sexiest Raw Vegan Woman in both 2008 and 2009.

She is also the host of Ani’s Raw Food Kitchen Show on YouTube. Ani has been seen on the Travel Channel’s Bizarre Foods, Channel 7 ABC, and has been featured in numerous magazines including Food & Wine, Alternative Medicine, Oxygen, VegNews, Delicious Living, Vegetarian Times, and Get Fresh.

“Since I’ve gotten the book, I’ve made a ton few of the desserts. Because, you know, someone had to taste test it to tell you all about it… Right? I ate those delicious desserts for you. Anyway, I’ve made some desserts from this book and haven’t yet found one I don’t like. Throughout the book are helpful eco-friendly and green living (Sorry! I hate to use that term but it fits here.) tips like making your own beauty treatments or household cleaners. Phyo also includes some information about being considerate to our environment. I love this book.”